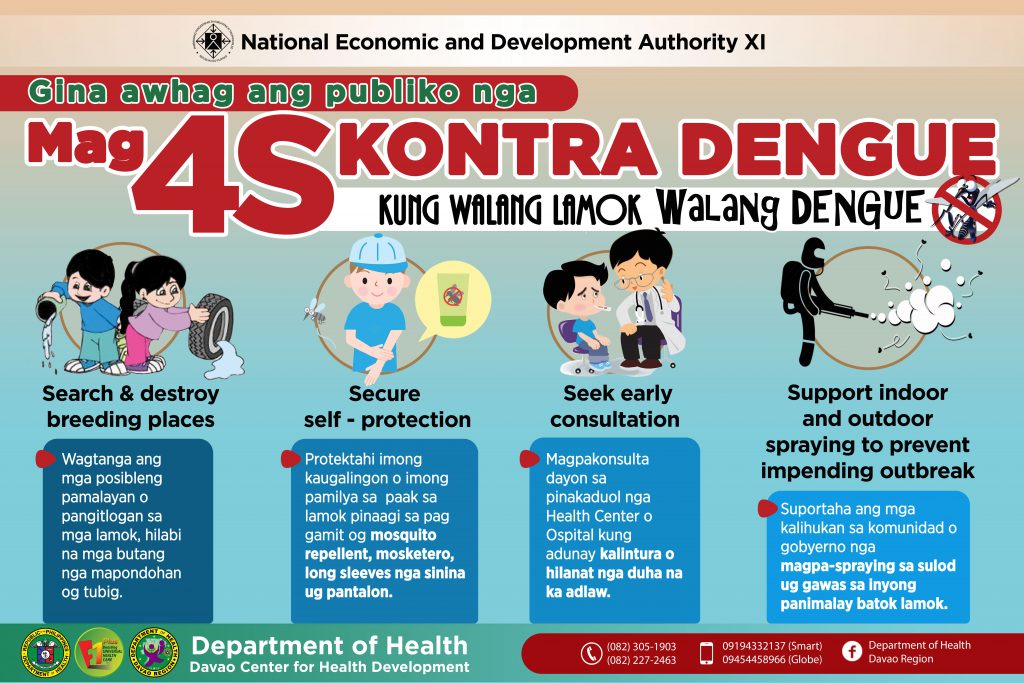 Davao City – In support of the Department of Health’s (DOH) urgent campaign against dengue fever, the Regional Development Council (RDC) XI calls on government agencies and local government units to urge households, schools and communities to take preventive measures to curb the rising cases of the mosquito-borne disease in Davao Region.

Whilst Davao Region is not among the areas within the epidemic or alert status, the number of reported dengue cases therein has notably increased by 67% from 2,914 cases between January to August 2018 to 4,852 cases in 2019, with Davao City having the most number of cases at 2,576.

“Combating dengue cannot be sustained by DOH or the LGUs alone, but requires the concerted effort of the entire Davao Region community,” remarked Acting RDC XI Chairperson and NEDA XI Director Maria Lourdes Lim during Council’s 3rd quarter Meeting on August 23.  This prompted the Council to issue Resolution No. 87, s. 2019 enjoining the cooperation of all stakeholders.

As key interventions, the DOH has encouraged everyone to be prime movers in controlling the mosquito population and avoiding possible dengue deaths within the community through (1) 4S strategy, (2) Four o’clock habit to “search and destroy possible mosquito-breeding places” at 4 p.m. daily, and the (3) Aksyon Barangay Kontra Dengue.

The 4S campaign stands for “Search and Destroy” mosquito breeding places, “Secure Self Protection” from mosquito bite, “Seek Early Consultation” when signs and symptoms of dengue occur, and “Say Yes to Fogging” as a last resort when there is an impending outbreak.

The “4-o’clock habit” seeks to enjoin the communities to take time to weed out dengue breeding sites at 4 p.m. each day.  Cleaning before evening is key to reducing the risk of dengue, as mosquitos carrying the disease are most active at dusk. 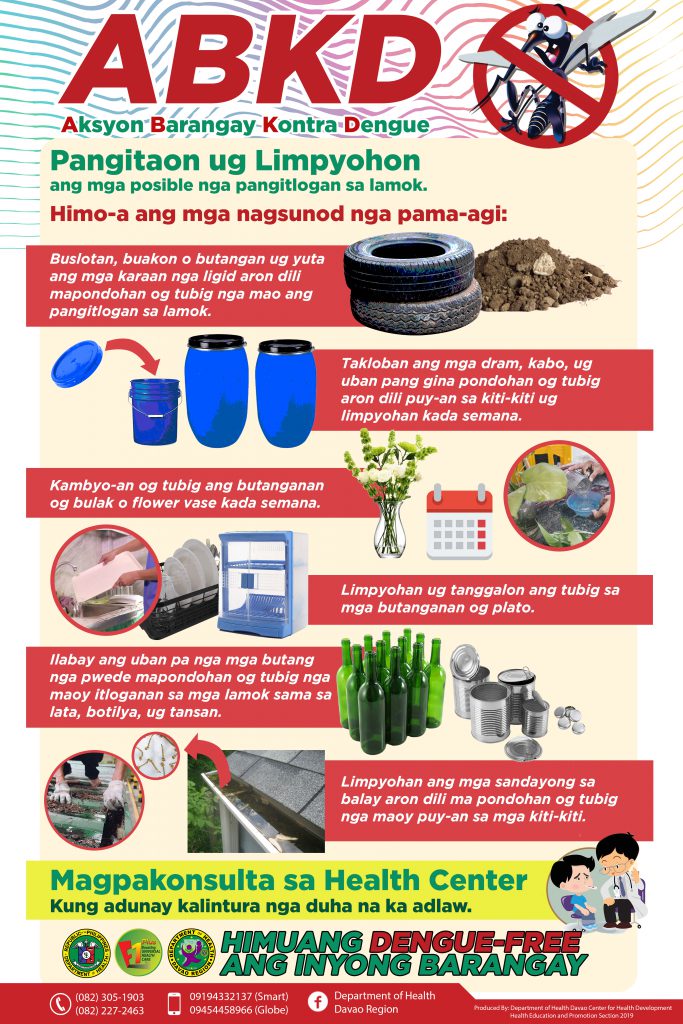 For a sustainable community action, the DOH has launched the Aksyon Barangay Kontra Dengue (ABKD). which calls for regular weekly clean-up drives in the barangays with the participation of community volunteers. School authorities are likewise urged to implement search and destroy actions at the school premises at least once every week before classes break on a weekend.

Owners or managers of business establishments/malls and construction sites are strongly encouraged to initiate and sustain their own clean-up activities in their areas. The RDC XI further endorsed the availability of dengue tests in the barangays, and posting in the DOH website of the hotspots of dengue incidents in Davao Region.

Dengue fever is a viral infection transmitted by the bite of an infected female Aedes mosquito, which manifests as a flu-like illness affecting infants, young children and adults, 3-14 days after the infective bite, and could develop into a potentially lethal complication, if untreated. – Felicidad M. Rabe, NEDA XI