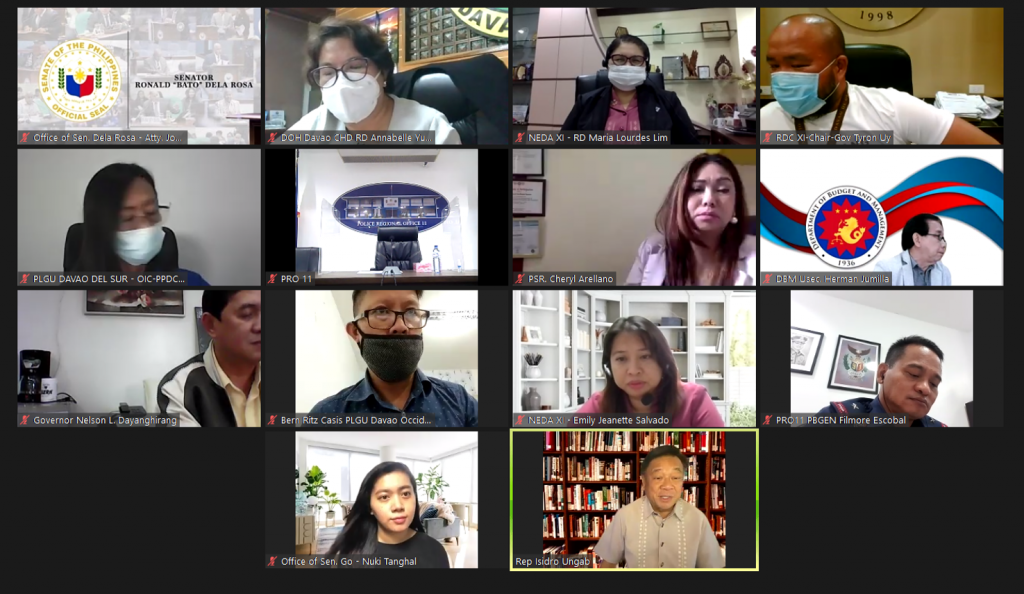 The RDC XI AdCom is composed of the Members of the House of Representatives in Davao Region, the RDC XI Executive Committee (ExCom), and with the addition of Senators Ronald “Bato” dela Rosa and Christopher Lawrence “Bong” Go as special members.  Also in attendance was Department of Budget and Management (DBM) Undersecretary Hernan Jumilla, representing Cabinet Officer for Regional Development and Security (CORDS) XI DBM Secretary Wendel E. Avisado.

Among the matters discussed during the said meeting, which was co-convened by Representative Isidro T. Ungab of the 3rd Congressional District of Davao City and Senator Go, include the Highlights of Davao Region’s Performance for 2020 and Development Targets for CYs 2021 to 2022; Status of FY 2021 Budget Proposals of Agency Regional Offices (AROs), State Universities and Colleges (SUCs), and Government-owned and Controlled Corporations (GOCCs) in Davao Region; Summary of RDC XI-endorsed Budget Proposals of Davao Region; Implications of the Supreme Court Ruling on the Mandanas-Garcia Petitions; and Priority Legislative Agenda under the Davao Regional Development Plan (RDP), 2017-2022 Midterm Update.

As an offshoot of the RDC XI AdCom meeting, seven (7) Resolutions were passed. One of the major resolutions passed pertains to the recommendations of the Committee to ensure the smooth devolution of selected national government functions to Local Government Units (LGUs) arising from the Supreme Court Ruling on the Mandanas-Garcia petitions. Among others, the AdCom XI recommended for the inclusion of an analytical basis to ensure the fair and equitable distribution of the Growth Equalization Fund; Implementation of capacity development among the LGUs; and prioritization of affected NGA personnel in the recruitment for vacant positions in LGUs.

The AdCom XI also passed resolutions of endorsement for Davao Region’s priority policy recommendations, which include the Creation of the Metropolitan Davao Development Authority; Institutionalizing the Revitalized Barangay Police Program of the Philippine National Police (PNP); Regulating the Organization and Operation of Private Detective, Watchmen or Security Guards Agencies; Amendment of RA 11292 to include the Approved Local Shelter Plans (LSPs) of Cities and Municipalities as one of the Seal of Good Local Governance (SGLG) Award Indicators; Passage of the National Land Use Act (NALUA); and Magna Carta of Workers in the Informal Economy.

Representative Ungab, along with the representatives of Davao Region’s Congresspersons and Senators dela Rosa and Go, committed to assist in the passage of the proposed legislations. – Rowena M. Dango, Sr. EDS, NEDA XI