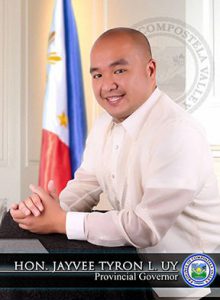 Governor Jayvee Tyron L. Uy took his oath before President Rodrigo Roa Duterte in Malacañan today, 28 October 2019, as the newly-appointed Chairperson of the Regional Development Council (RDC) XI. According to the Office of the President’s Appointments Office, Governor Uy’s appointment as RDC XI Chairperson was signed by President Duterte on 17 October 2019.

Governor Uy is currently in his second term as chief executive of Compostela Valley Province in Davao Region. During his first term as Provincial Governor, he served as Chairperson of the Regional Peace and Order Council XI and led Davao Region’s local government units in operationalizing the whole-of-nation approach towards ending local communist armed conflict, especially in far-flung communities.

The selection and appointment of RDC Chairpersons are pursuant to Executive Order 325 (s.1996). EO 325 likewise provides the functions and responsibilities of the RDC Chairperson, which include presiding over the meetings of the RDC as well as of the RDC’s Executive and Advisory Committees, directing the formulation of a comprehensive regional development plan and the preparation of a system of investment programming priorities in the region, and supervision over the monitoring of the implementation of major interprovincial and regionwide development programs, projects and activities, among others. The RDC officers’ terms of office coincide with the three-year regular term of local elective officials. Governor Uy shall serve as RDC XI Chairperson for the term 2019-2022. – NEDA XI (Photo from: www.ecomval.gov.ph)