The 3-day activity was attended by participants from the head agencies/offices, of the 12 RTF11-ELCAC Clusters, cluster member agencies/offices, concerned OVI reporting agencies/offices, representatives from the concerned Local Task Forces (LTF) of Provinces and Cities with cleared barangays, units of the Armed Forces of the Philippines – Eastern Mindanao Command (AFP-EMC), the Philippine National Police (PNP) – Regional Office XI and its Provincial and City Police Offices, and members of the RPMC XI. During the activity, the Regional Clusters refined the RTF11 – ELCAC adopted strategic indicators for the monitoring and evaluation of the RTF11’s implementation of the Regional EO 70 ELCAC Plan based on the availability of data and monitoring capacity of concerned agencies and LTFs. Critical indicators aligned with the success parameters required for the Local Chief Executive reports prescribed by RTF11-ELCAC Executive Committee Resolution No. 5, s. 2021, “Adopting the Success Parameters in Reporting Updates on RTF11-ELCAC Initiatives by Local Chief Executives of Davao Region’s Provinces and Davao City” was also generated for confirmation of all concerned Local Task Forces (LTFs) with ELCAC cleared barangays.

The workshop was conducted in 3 parts namely, (i) Initial plenary session, (ii) Workshop Proper, and (iii) Cluster Reports and Synthesis Session. During the initial plenary session, Acting RPMC XI Secretary Ms. Laurice Cyl C. Pondoyo presented to the participants the RTF11-ELCAC Cluster OVIs Monitoring and Evaluation (M&E) Framework and the Annual OVI Accomplishments of the Regional Clusters for 2020. Further, Col. Jacob Thaddeus Obligado of the 10th Infantry Division, G7, Philippine Army also presented the success parameters, reporting process and templates for RTF11-ELCAC initiatives by the LTF and Local Chief Executives for the participants’ guidance in achieving the expected workshop outputs and outcomes. Lastly, Ms. Maria Farah C. Caralos from the Department of the Interior and Local Government (DILG) XI presented the DILG Barangay Development Program (BDP) M&E System and Reporting process through the SubayBAYAN for the participants’ information in response to the release of the guidelines for the availment of funds and implementation of BDP projects for ELCAC cleared barangays. 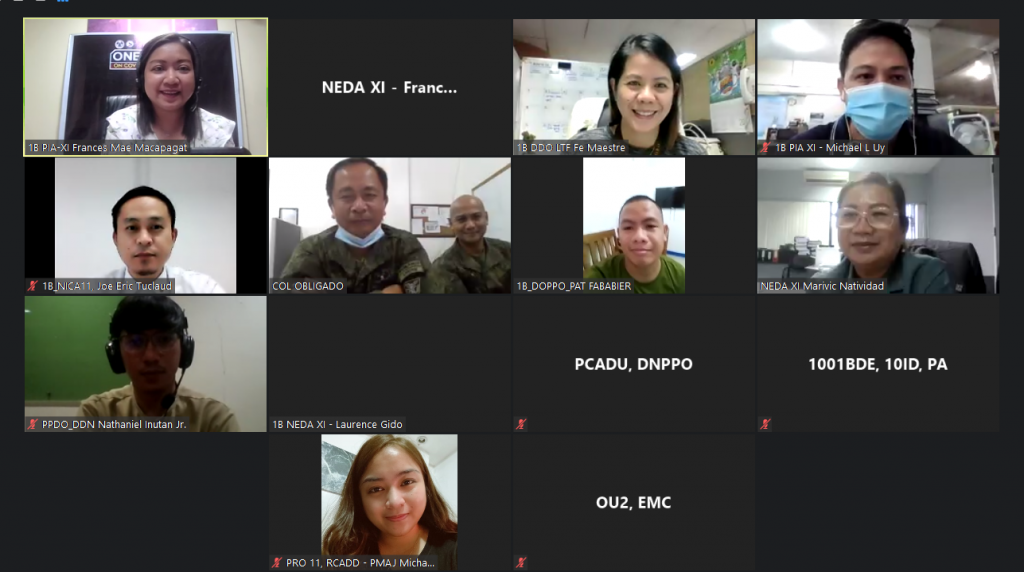 The final session provided a venue for the presentation of reports of all clusters on outputs and discussions on the validation of Cluster OVIs during their respective breakout sessions. In summary, a total of 169 indicators were adopted, 138 were modified, 68 were dropped and 33 were added, for a total of 355 validated indicators which will now be monitored for accomplishments starting with the 1st Quarter of 2021. This has seen an 11 percent reduction from the original list as validated and committed by the responsible agencies and Cluster members that the validated data can be generated and monitored.

Moving forward, quarterly reports from the concerned agencies and offices shall be submitted to the Cluster Head Agencies to which the OVIs are being reported, for consolidation, analysis and generation of a cluster report. These cluster reports shall be submitted to the RTF11-ELCAC Secretariat through the NEDA XI for consolidation and submission to the RTF11-ELCAC and NTF-ELCAC. – Francesca Dianne B. Solis, NEDA XI