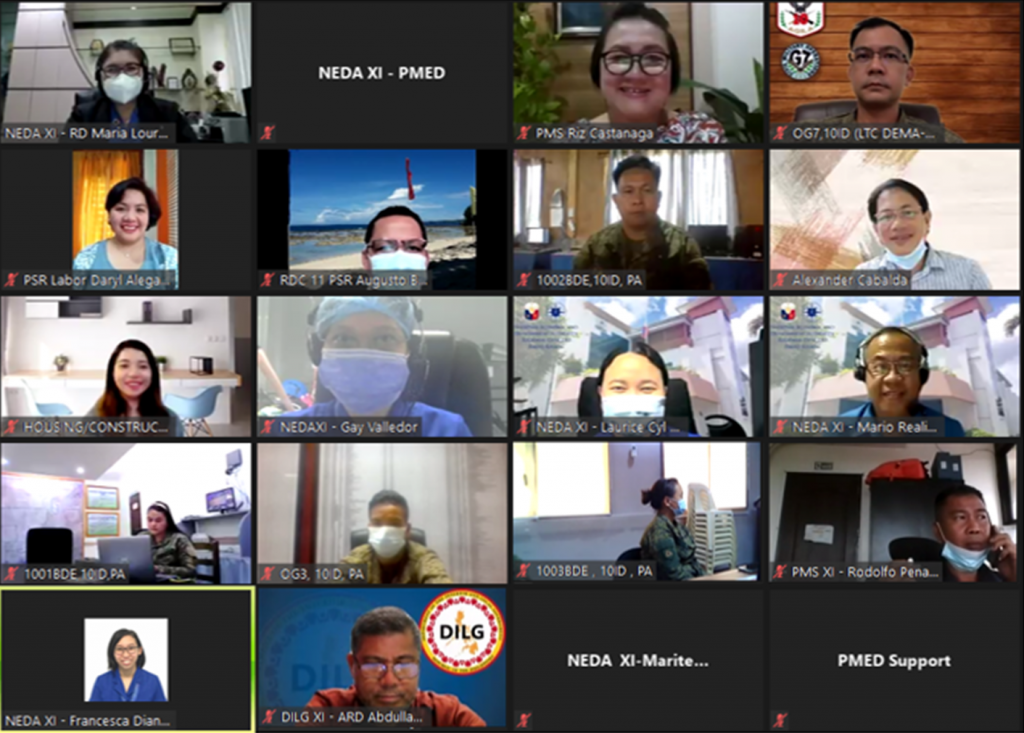 A total of 527 programs and projects amounting to PhP 77.825 billion were desk-monitored and validated by the Committee, of which 28.65 percent of the projects were located in Davao City, followed by 24.86 percent located in Davao del Norte. A large share or 64.33 percent of the programs and projects contributed to the Davao Region Development Plan (DRDP) outcome on Accelerating Infrastructure Development. Of the monitored programs and projects, 20.49 percent were reported as completed, 44.40 percent are on-going, 20.11 percent are suspended, 0.57 percent were terminated, and 14.42 percent have not yet started. From the report, the Committee observed housing projects dominating the list of top projects behind schedule with project costs amounting to PhP 10 – 299 million. The Committee also noted housing projects which started in 2014 which were already marked for termination. Moreover, it was reported that 97 projects with a total project cost of PhP 15.401 billion were encountering Road Right of Way issues, including but not limited to (1) obstruction of improvements/structures, and utility posts and pipes, and (2) pending land claims. With this, the Committee recommended for implementing agencies to strengthen coordination with local government units and other concerned national government agencies or private entities for the negotiation of land claims and encountered obstructions, respectively. On the other hand, the Committee noted that there were no projects reported encountering issues in peace and order conditions disrupting project implementation activities for the reference period, which signified the Committee’s success with its engagement with the 10th Infantry Division of the Philippine Army in validating projects reported with peace and order issues. The said project implementation issues on peace and order conditions within the project sites was consistently reported as one of the top 5 issues encountered during project implementation in past project monitoring activities.

In addition, the Committee discussed and validated the status of 5 projects, located in Davao del Norte, Davao de Oro and Davao City, which were virtually monitored by the RPMC XI Monitoring Team on May 6-7, 2021. Findings from the virtual interviews with stakeholders revealed that project-host barangay officials, host barangay officials and other stakeholders were not well-informed on the status and ownership of the project and their responsibilities upon completion of construction works by the contractors. With this, the Committee recommended that the implementing agencies undertake exit or turn-over meetings as standard operating procedure, with the host local government units (LGU), down to the barangay level, specifically on informing the host LGUs on their responsibilities and the expected impact of the completed projects to the community.

Moreover, the virtual project validation on the Davao City Bypass Road Construction Project (DCBRCP) surfaced the issue on the interphasing of some of the project’s segments with the proposed alignment of the Mindanao Railway Project – Tagum-Davao-Digos (MRP-TDD) segment. With this, the Department of Transportation – Project Management Office (DOTr-PMO) and the Department of Public Works and Highways – Unified Project Management Office (DPWH – UPMO) were requested to provide updated information on the interphasing segments of the MRP-TDD and the DCBRCP, respectively. Moreover, both agencies were enjoined by the Committee to coordinate their investment and implementation programming activities in future phases of the two projects.

Also discussed during the meeting were updates on the activities approved and conducted by the Committee during the previous quarter. The Committee successfully conducted the 3-day RTF11-ELCAC Workshop on the Refinement of Strategic Indicators for Cluster Performance Objectively Verifiable Indicators on March 17-19, 2021, which saw the overwhelming support from stakeholders and target participants including the attendance of observers from the National Task Force – ELCAC.